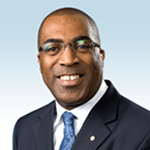 Bishop Derek previously worked as an administrator for British Gas West Midlands before going into full time church work in 1987.

He is a Minister of Religion for the New Testament Church of God. He was National Director of Evangelism (1987 1991), then National Director of Youth and Christian Education (1991 1997) then the District Bishop for Birmingham / Solihull (1996-2014) and since 2014 has been the National Secretary Treasurer.

Bishop Derek has served on a number of committees, including Relate (Executive Member), Lord Chancellor Advisory Committee, Birmingham Citizens, Chair of The Drum (Arts organisation), he is a member of the Rotary Club of Birmingham, as a past President, and was Chair of the West Midlands Police Authority.

In the New Year Honours 2023 Bishop Derek was awarded the OBE for services to the Windrush Generation.