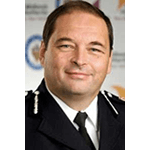 Chris joined the Metropolitan Police in 1980. Following service in Central London he ran an estates policing pilot in South Acton and then joined a New Scotland Yard policy group with responsibility for estates and inner city policing. This work included a secondment to the London City Action Team.

In 2006 he was appointed the Deputy Chief Executive and Director of Policing Policy and Practice at the National Policing Improvement Agency (NPIA) based in London. He was responsible for research and evaluation, doctrine development and implementation and portfolio management.