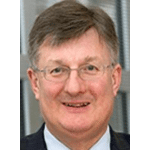 Between 2003 and 2011 he worked in Westminster as Director-General of the British Chambers of Commerce, representing the interests of 100,000 businesses.

His activities are now in the field of Education, Enterprise and Employability. David is Chairman of the Stoke on Trent and Staffordshire LEP. He is also a Governor of Coventry University College and Chair of their Education Common Board.

He is a Fellow of the Royal Society of Arts and a past Master of the Worshipful Company of Loriners, one of the oldest City Livery Companies.