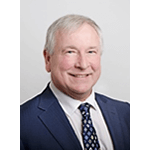 After gaining a doctorate in chemistry from the University of Birmingham John worked initially as a chemist in the plastics industry. Later, becoming a chartered management accountant, he had a career as finance director in manufacturing later moving to the service sector (passenger transport) where he became Managing Director in the largest independent operator in the West Midlands.

From 2000-2008 John was a member of Council at the University of Birmingham. He retains strong links with the University including Chairman of the Defence Studies Dining Club and member of the West Midlands Military Education Committee.

He was the Chairman of the governing body at Bishop Vesey’s Grammar School, Sutton Coldfield from 2012-2018 and was a non-executive director of Birmingham Community Healthcare NHS Trust from 2009-2018.

John has served as a director or chairman of various charitable organisations and is a member of the Lunar Society and Birmingham Civic Society.

In 2015 John was awarded an honorary doctorate by the University of Birmingham .