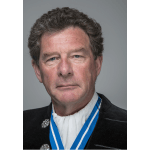 Jonnie produced public service drama, documentary and digital media for over 30 years from the West Midlands. He founded Maverick Television, one of the UK’s leading independent production companies with bases in Birmingham, Los Angeles and London. Maverick joined All3Media in 2007. Throughout his career he has contributed to the development and delivery of policy across the cultural, education and creative industries.

He is an honorary Doctor of Wolverhampton, Coventry and Birmingham City Universities. In 2015/16 Jonnie was High Sheriff of the West Midlands with a theme of arts, creativity, young people, and justice.

In 2010 Jonnie was awarded an MBE for services to International Trade.