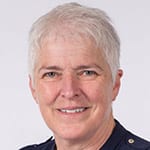 For services to charity, particularly Edward’s Trust and the community in Birmingham

Attempting to summarise all the causes and charities Judy has helped is a challenge.
She volunteered for Edward’s Trust bereavement charity since 1991, playing a major role in fund-raising, which led her to being made a Patron of the Trust in 1991.
Since 1986 she has supported Birmingham St Mary’s Hospice with fund-raising and written a booklet, “Funeral Matters”, which is in its third edition and has generated charitable donations.
Having gained a free place at King Edward VI High School for Girls (KESH), Judy valued the opportunity the education gave her and in 2012 formed a new charity that has raised £1,400,000 to fund assisted places. In 2014 she was elected Chairman of the charity.
On top of this she has served a variety of churches, including St George’s in Edgbaston, St Martin’s in Birmingham and St Ildierna’s in Cornwall.
Judy is involved with numerous charities including advising on legacy promotion initiatives, she is an Ambassador for Cancer Research UK and supporter of the University of Birmingham.
It is a wonder that Judy gets time to sleep.