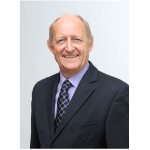 Les joined Jaguar in 1973 after completing 5 years service with the Regular Army – Parachute Regiment. He has served for 31 years with the Reserves and risen to the rank of Major.