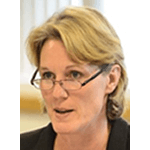 Louise is the President of Warwickshire College Group, a group of colleges that, combined, make up one of the largest further and higher education colleges in the UK and one which was awarded a Queen’s Anniversary Prize for its work in engineering.

Her career has spanned both the private and public sectors including the NHS and retail. She has also undertaken lecturing on Masters in Business Administration and has run her own small business.

In 2007, Louise was awarded an OBE in the Queen’s birthday honours list for her services to business.

Louise has a 1st Class Honours Degree in Business; a Masters in Business; is a qualified Human Resource practitioner and a qualified Counsellor & Psychotherapist. For 5 years until 2014 she served as a volunteer counsellor for hundreds of clients on issues around loss, grief and trauma.

With a strong commitment to young people, she has voluntarily served on School Boards of Governors, College Boards and a University Board.

As an approved Foster Carer, Louise and her family have welcomed young people into their home, for some ten years, and currently continue to do so with the aim of providing a safe environment, warmth, support and a real commitment to raising young people’s aspirations in life.