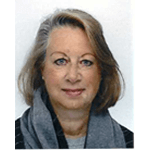 Lynda worked for the West Midlands Lieutenancy since 1978, first as Assistant Clerk, then as the Clerk from 1986 until she retired in 2013. During that time she served 3 Lord-Lieutenants, organised over 600 Royal Visits, 2 national Maundy Services and co-ordinated both the Golden and Diamond Jubilee visits of HM The Queen to the West Midlands.

Lynda has addressed the National Clerks Conference at Buckingham Palace and was awarded the MVO in 1994, then the LVO in 2007.