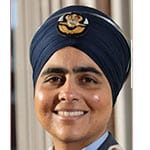 In October 2005, Mandeep Kaur was appointed as the first and only Sikh Chaplain for the entire British Armed Forces and still remains in the post.
Her role as Sikh Chaplain involves providing Armed Forces personnel and families with moral, pastoral and spiritual support.
She advises and has engaged with the Ministry of Defence on interfaith issues and has helped educate and correct misconceptions.
In addition, Mandeep has raised awareness of drug problems, domestic violence and gender inequality through inspirational talks and going out into the community to listen and support people.
She is a role model for many and has inspired women not only to believe in themselves, but to work selflessly for society.