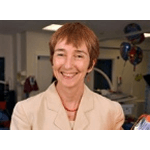 Deirdre is Professor of Paediatric Hepatology at the University of Birmingham, Consultant Paediatric Hepatologist and Founding Director of the Liver Unit for Birmingham Children’s Hospital NHS Foundation Trust. She set up the Liver Unit at Birmingham Children’s Hospital which provides a national and international service for children with liver failure and undergoing liver transplantation, transforming survival and outcome for these children. She runs an active research programme focusing on viral hepatitis in children, molecular genetics of inherited liver disease, quality and outcome of life following liver and/or intestinal transplantation.

She is on the council of the General Medical Council and a Non-executive Director of NHS Blood and Transplant .

She was Commissioner on the Care Quality Commission and Healthcare Commission and Non-executive Director at the Health Research Authority and the Royal Wolverhampton NHS Trust. She has been the Medical Director of the Children’s Hospital, and President of the European Society of Paediatric Gastroenterology, Hepatology and Nutrition, British Society for Paediatric Gastroenterology, Hepatology and Nutrition and the International Paediatric Transplant Association