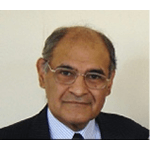 Professor Gatrad qualified at Leeds University and is Professor of Paediatrics and Child Health at the Universities of Kentucky (USA) and Wolverhampton. He has served the NHS for 45 years and holds a consultant post at the Manor Hospital in Walsall.

He holds a National award for Clinical Excellence, has written 2 textbooks and published over 80 papers on paediatric issues in International journals. In recognition of his having halved the mortality of new-born babies in Walsall and for improving paediatric services he was made Freeman of the Borough of Walsall.

His own charity Midland International Aid Trust has provided humanitarian aid to over 15 countries and set up many medical projects abroad, including cleft lip/palate, cataract, limb prosthesis and breast operations. He has built a large Maternity and Children’s hospital in Gujarat and named it after his mother. For his humanitarian work he was awarded an Honorary Doctorate (DSc) by the University of Wolverhampton.