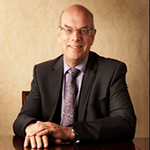 In 2014 Sir David was awarded a Knighthood for services to education.