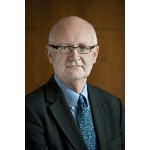 Sir Nigel is currently Chair of the Committee on Radioactive Waste Management.  Previously he was Executive Director of the Schwarzman Scholars Programme based in New York and London. He was Vice-Chancellor and President of the University of Warwick from 2006-2016.

He is an international research figure in the field of geography. He maintains an active research career and has received a number of distinguished academic awards including the Royal Geographical Society Victoria Medal for contributions to geographic research (2003), Distinguished Scholarship Honors from the Association of American Geographers (2007), and the Royal Scottish Geographical Society Gold Medal (2008). He was made a Fellow of the British Academy (2003), received Honorary LLDs from the Universities of Bristol and Monash. Former member of the Governing Board of the European Institute for Innovation and Technology, and a Commissioner of the Marshall Aid Commemoration Commission.

Sir Nigel was knighted in the New Year Honours List 2015.