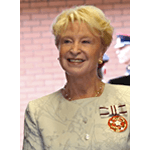 Sylvia’s career has spanned the public and private sectors, as before gaining her nursing qualification as a mature student, she was a director of a family business. She worked for Wolverhampton NHS Trust (1981-2000), firstly in General Nursing, then a Health Visitor, and finally as a member of the Health Care Management Team, helping to shape NHS policy.

Commissioned into the Army Reserve as a Nursing Officer in 1987, Sylvia was a member of 202 (Midland) Field Hospital (V). She served in both Gulf Conflicts. On leaving the NHS, she took up the post of West Midland SaBRE Campaign Director (Supporting Britain’s Reservists and Employers), an MOD appointment.